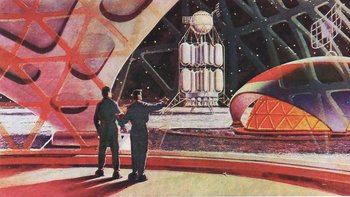 The Noon Universe is The 'Verse where many of the Strugatsky Brothers' works are set. The name comes from the first novel's title and refers to the "noon" (as in, "the high point") of human civilization in the 22nd century, which the novels describe, and its looming dusk. Also, the title was a slight Take That! at Daybreak 2250, a post-apocalyptic sci-fi novel by Andre Norton that the brothers read and disliked with a passion.

The setting is a future Communist/Socialist Utopia that gets gradually deconstructed as the authors become disillusioned with the Soviet Union. Intellectuals suffer from free time and idle hands turn to dangerous experiments, the Precursors may be guiding the course of events on Earth and it's driving the security services justifiably paranoid, attempts to help out primitive alien civilizations frequently end in tragedy, and a general "Golden Age feeling the premonitions of its own decay" atmosphere pervades. The utopia is never truly deconstructed to the point of destruction (though Word of God says only Arkady's death prevented it). There are rumors that their works suffered from massive censorship in early development, censoring away from text (but not background lore) many darker parts, like apocalyptic brutal wars and world-scale disasters that led to the post-scarcity society they depicted.

The Noon Universe starts with a "Society of Plenty" that averts decadence through a well planned education system that respects the role of the Teacher and strives to teach pupils the values of Love of Labor, Camraderie and Goodness. If you ask a Russian intellectual for a vision of Utopia you're likely to get this as an answer.

Thanks to advances in medical science, Noon Universe Earthlings are capable of near super-human feats and can recover from potentially deadly injuries. As they explore the universe, they discover many Earthlike planets inhabited by humanoids re-enacting various periods of Earth history in the most unpleasant ways possible. This allows for some seriously dark and gritty social satire and the posing of interesting questions: just what can a society of Sufficiently Advanced Earthlings do to prevent the Holocaust or the Inquisition from recurring elsewhere without denying free will, and what effect will interacting with violent cultures have on the Earthlings themselves?

The eleventh novel in the series, The White Queen (as in the chess piece), was planned but never completed due to Arkady Strugatsky's death in 1991.

In addition to the core novels above, the following Strugatsky works are considered to be set in the same universe, in a late 20th-mid 21st century:

Adaptations in other media:

The Noon Universe cycle features these tropes in general: