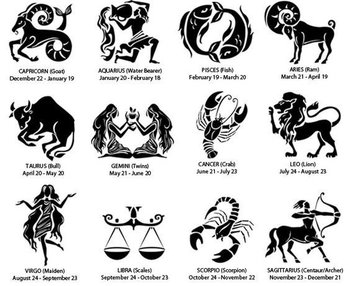 “Pallas (Minerva) watches over the Woolbearer (Aries);
Cytherea (Venus) over Taurus;
Phoebus (Apollo) the shapely Gemini;
You, Cyllenius (Mercury), over Cancer;
and Jupiter, you yourself rule Leo with the Mother of the Gods;
Virgo who bears ears of grain belongs to Ceres;
and the forged scales (Libra) to Vulcan;
quarrelsome Scorpio clings to Mars;
Diana cherishes the hunting man part horse (Sagittarius);
and Vesta the contracted stars of Capricorn;
opposite Jupiter is Aquarius, the star of Juno;
and Neptune acknowledges his own Pisces in the upper air.”
— Manilius
Advertisement:

"What's your sign?" is among the most notorious (and least effective) pick-up lines. "Sign" in this case means "star sign," a way of guessing a person's personality by their date of birth.

Astrology is actually a bit more complex than that. The term "star sign" is technically inaccurate for a start - that horoscope that appears in the paper every day is actually the sun sign. Furthermore, every planet has a sign - you might say that you're a Virgo, but your Mercury, Mars and Venus might all be in Libra while Jupiter is meandering around in Capricorn. A birth chart will also take into account where the planets were in the sky and the angles at which they connect to each other. Astrology is a sophisticated and actually very math-heavy diversion, that many people get college degrees for, and still don't understand completely.

The signs themselves belong to one of the four elements. According to astrology, water signs are emotional, air signs are intellectual, earth signs are practical and fire signs are passionate. They also fall in to one of three qualities: Cardinal (pioneering), Fixed (constant) and Mutable (adaptable). Each sign has a ruling "planet" (Pluto still counts), or "Luminary" (the Sun or Moon), although the planet/luminary itself may be placed in a totally different sign in the birth chart. Which makes things even more confusing.

Obviously, this is all a bit too complicated to be effective as a motif, so a Zodiac motif will just use the sun sign, with a character claiming "I'm a Gemini," or "my boyfriend's a Scorpio."

The sun signs are:

Zodiacal signs were never based solely on constellations, as anyone can tell who has seen the size of Virgo (huge) and Libra (tiny) in skies. The signs are 12 equal divisions of 30 degrees (360/12), starting from Equinox, the so-called "point Aries", when the Ecliptic crosses the Equator lines in heaven. The commonly used dates for the signs don't actually line up with the constellations they were originally based on any more, and haven't for about 2000 years. Also, though the course of the sun passes through 13 and not 12 constellations, Ophiuchus/Serpentarius,

the Serpent Holder, which the sun passes through between Scorpio and Sagittarius, has been traditionally omitted from the sun signs.

If a character refers to themselves as "cuspal," it means they were born within the last few days of one sign or the first few days of the next. Someone born on the 18th of February for example, is a cuspal Aquarius/Pisces. This is popular for characters with some kind of duality in their nature (although the importance and even existence cusp placements are highly disputed among astrologers). Each sign is further divided into "decans", consisting of approximately 10 degrees, with the second and third decanites being the next sign in that element (Virgo-Virgo, Virgo-Capricorn, and Virgo-Taurus, for example). Lastly, is the "Ascendant", the sign that was on the horizon at birth, representing superficial personality, for which the whole birth chart is oriented from. Though most zodiac references aren't written with the last two factors in mind, instead treating it more like Personality Blood Types, than actual astrological practice.

Characters almost invariably match the star sign they're born under. There's also a trend regarding which type of character falls under which sign. The gallant hero is nearly always a Leo. The Lancer is usually an Aries. Female love interests are often Pisces. Cloudcuckoolanders tend to be poster children for Aquarius. Of all the signs, Scorpio gets the roughest deal. Its connections to the "dark side" of life make it de facto sign for villains and highly unsuitable love interests. Some signs are almost unheard of in TV and books - few characters claim to be Libras, Capricorns or a Sagittarius, for example. This trend holds true even when the Zodiac reference is just the character's profile information.

The prevalence of belief in astrology in earlier centuries generated many common expressions: Star-crossed, jovial, saturnine, mercurial, and so on.

Due to the fact that there are a set of twelve signs, the Zodiac sometimes finds itself involved in a Gotta Catch Them All type of plot (sometimes involving the "secret" 13th sign). Including in the real world.