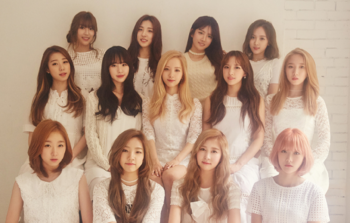 WJSN is a thirteen-member Korean Pop Music group that debuted in 2016. Their name is an Initialism Title for Wu Ju Son Yeo, which translates to their English name, Cosmic Girls. The group is also divided into four sub-units (Wonder, Joy, Sweet, Natural). They are co-managed by Starship and Yuehua Entertainment under a joint agreement between the Korean and Chinese labels. As a result, WJSN consists of ten Korean members and three Chinese members.

To date, they have released three extended play albums, as well as a batch of collaborative songs and soundtrack contributions. The group also had their own reality show, Would You Like Girls (My Cosmic Diary), which spanned from after their debut to just around Yeonjung's addition to the group. They were nominated for Best New Artist for 2016 at the Mnet Asian Music Awards and Melon Music Awards, and won Rookie/New Artist of the Year at the Asia Artist Awards, Seoul Success Awards, and M Countdown In China.

Tropes related to WJSN and their music: