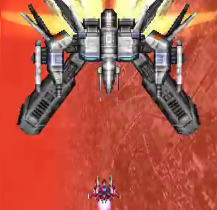 RefleX is a 2D Bullet Hell Shoot 'em Up developed by SITER SKAIN and is the second chapter of The Tale of ALLTYNEX trilogy. The gameplay plays mostly like a regular shooter but with a few twists. Instead of being the regular One-Hit-Point Wonder, your ship, the Phoenix Mk-II, can take a boatload of hits, and you have a shield that can reflect certain bullets right back at the enemies. This is offset by the fact that you have no extra lives, no bombs and no way of restoring durability once it's gone.

The story first centers around the resistance group known as the The Valkyness in their effort against the corrupt government. Progress is slow and the government doesn't even recognize the Valkyness as a serious threat... more of a minor nuisance. That is, until their new fighter, the Phoenix Mk-II developed by Doctor Dennis, is scrambled after its carrier ship is shot down. Equipped with a new form of shielding system, extreme durability, and significantly greater firepower, it poses a new serious threat to the government.

Then a third party gets involved, things take a turn for the worse. RefleX is the most story-driven game in the trilogy and has by far the darkest plot as well. Although the story is All There in the Manual, it is noticeable in that the story plays a huge role in gameplay, such as the ship being repaired before stages 5 and 7.

This game originally started out as a relatively short freeware game by Ysuer titled Reflection that was released for Windows in 1998. At one point, Ysuer joined SITER SKAIN and began working on a remake of the game under the project name "Reflection X". Unfortunately, due to problems that rose during its development, it took ten years for the game to finally see the light of day in 2008. On June 6, 2013, Nyu Media brought RefleX overseas alongside Kamui and ALLTYNEX Second, releasing them on Nyu Media, Rice Digital, GamersGate, and DESURA, and later to Steam on March 27, 2014. The original soundtrack can be purchased for digital download or listened to on SITER SKAIN's Bandcamp website here

If you're interested in trying out the original Reflection, you can still find it here

Not to be confused with the Duran Duran song "The Reflex", the Quake-like First-Person Shooter of the same name, or RFLEX.

My fathers, Descendants of the Yuda.
I have fulfilled my objective and now return to dust with the 12 souls.
May peace reign forever, may mothers be loved and fathers be honored.