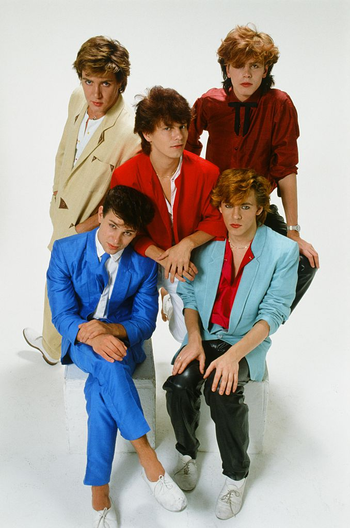 Guess the decade.
"Her name is Rio, and I'm hungry like the wolf."
—Edited audio from an ad for a Duran Duran concert.
Advertisement:

Duran Duran are an English pop-rock band, formed in Birmingham in 1978 and famous for a long series of popular singles, albums and vivid music videos in The '80s and beyond, for which they've won two Grammy Awards. They were one of the most commercially successful of the New Romantic bands and a leading band in the MTV-driven "Second British Invasion" of the United States. They are named after the character of Professor Durand Durand from the 1968 movie Barbarella.

Their core members for their most successful period were singer Simon Le Bon, keyboardist Nick Rhodes, and three unrelated Taylors: bassist John, guitarist Andy and drummer Roger. Despite numerous personnel changes over the years, Le Bon, Rhodes, John and Roger Taylor are still active into the 2020s over forty years]] since the band's formation.

In 1980, they recorded two demo tapes and performed in clubs around Birmingham and London. In late 1980 when touring as an opening act for Hazel O'Connor, the band attracted critical attention resulting in a bidding war between the record companies EMI and Phonogram Records. "A certain patriotism" toward the label of The Beatles led them to sign with EMI that December. However, Nick Rhodes said in a 1998 interview with Deluxe magazine that the band felt they were "appallingly ripped off" by the EMI contract.

Although they began their career as "a group of art school, experimental, post punk rockers", Duran Duran were generally considered part of the New Romantic scene, with other style-and-dance bands such as Spandau Ballet, Japan and ABC. Their quick rise to stardom, polished good looks and embrace of the teen press almost guaranteed disfavour from music critics: during the 1980s, they were considered the quintessential manufactured, throw-away pop group. However, according to the Sunday Herald, "To describe them, as some have, as the first Boy Band misrepresents their appeal. Their weapons were never just their looks, but self-penned songs." As Moby said of the band in his website diary in 2003: "... they were cursed by what we can call the 'Bee Gees curse', which is: 'write amazing songs, sell tons of records, and consequently incur the wrath or disinterest of the rock obsessed critical establishment'."

Duran Duran were amongst the earliest bands to work on their own remixes. Before the days of digital synthesizers and easy audio sampling, they created multilayered arrangements of their singles, sometimes recording entirely different extended performances of the songs in the studio. These "night versions" were generally available only on vinyl, as b-sides to 45 rpm singles or on 12-inch club singles, until the release of the compilation Night Versions: The Essential Duran Duran in 1998.

During their 1981-84 imperial phase, the albums Duran Duran, Rio and Seven And The Ragged Tiger sold millions and produced a string of successful and enduring singles — and accompanying videos — like "Planet Earth", "Girls On Film", "Hungry Like The Wolf", "Save A Prayer", "Rio", UK chart-topper "Is There Something I Should Know?", transatlantic number one "The Reflex", and "The Wild Boys".

In 1985, the band topped the US charts with the single "A View to a Kill" from the soundtrack of the film of the same name and performed at Live Aid, yet differences within the group ensured it would be the last time the 'classic' five-piece lineup would appear on stage together for what would prove to be 18 years. Andy Taylor and Roger Taylor both left before the recording of the band's fourth album, 1986's Notorious. The remaining trio recruited additional members and spent the rest of the 1980s and early 1990s continuing to release music, but to diminishing success.

An unexpected critical and commercial comeback followed however with 1993's Duran Duran (commonly called The Wedding Album) featuring two top-ten worldwide hits "Ordinary World" and "Come Undone", which returned the band to their former superstar status and their highest chart placings in years. This peak was short-lived, though. A 1995 album of cover songs, Thank You, produced a minor hit with Lou Reed's "Perfect Day" but was otherwise critically panned. John Taylor too left in 1997, reducing the band to a rump of just Le Bon, Rhodes and their American longtime guitarist/co-songwriter Warren Cuccurullo, which produced two more albums and a number of singles but compared to prior releases underperformed on the sales charts.

Then, early in the new millennium the pendulum swung once more. A full reunion of the classic lineup of Le Bon, Rhodes, and all three Taylors in 2001 led to a number of highly successful concert tours and the 2004 album Astronaut, the first featuring all five in 22 years and which reached number 3 in the UK — their highest in all that time. The album's lead track "(Reach Up for The) Sunrise" reached number 5 in the UK, their last major hit single to date. Andy Taylor left again in 2006, but the rest of the group has remained intact this time and released four additional albums, with the most recent being Future Past in October 2021.

Several of the band's contemporaries and peers, including The Bangles, Elton John, Kylie Minogue and Paul Young, have named themselves fans of Duran's stylish, uplifting pop. Simon Le Bon described the group as "the band to dance to when the bomb drops". Later acts from Justin Timberlake to Beck, Jonathan Davis of Korn, Gwen Stefani, P!nk, Dido, Barenaked Ladies, Franz Ferdinand, The Killers, Panic! at the Disco, Lostprophets (who took their name from the title of a Duran Duran bootleg tape), Goldfrapp, The Bravery and Scissor Sisters (who first came to wide notice while touring as DD's opening act) have all cited Duran Duran as a key band in their formative years.

Her name is Troper and she dances on the sand:

"Ordinary World" is the most famous song Duran Duran has ever produced and has become a staple song for the era.

"Ordinary World" is the most famous song Duran Duran has ever produced and has become a staple song for the era.