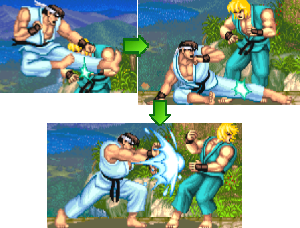 In video games, combos are a sequence of hits where, if the first hit connects, the target cannot act in any capacity until it is over (compare to Mercy Invincibility). A Combo Breaker is the sole exception to this rule. If your target could have escaped your attack sequence by any other means, such as blocking or performing an invincible move, then it isn't a combo.

Generally these show up in fighting games, but they can also be seen in other genres. For combos to be possible, attacks in a given game must put the enemy in a state where they cannot act (fighting games refer to this as "hitstun"). The state must also be vulnerable, and the attacker must recover from their attack fast enough to deliver another before the state ends.

Knocking an opponent down can end a combo due to the potentially gained invincibility, but not always. Some games have moves that can be used on downed opponents, and knock-downs due to effects of being dizzy actually set the opponent up for further punishment.

A gauge will often be present, especially in fighting games, that will keep track of successfully combo'd hits. When the combo meter reaches a high number, you have Idiosyncratic Combo Levels, and may receive some entertaining messages underneath.

Most fighting games nowadays have what's known as combo scaling, which means that attacks become less powerful the longer a combo is. This helps reduce the odds of a Curb-Stomp Battle where you can wipe out most or all of your opponent's health in one combo.

Very much Truth in Television for martial arts, as fighters will train to deliver a series of moves which are easy to do in succession, maintaining momentum while preventing the opponent from recovering.

If two or more attacks are done in concert or simultaneously, but do not fulfill the above criteria, it isn't a combo, but may be considered a Combination Attack.

Commands for special moves are not combos (e.g. down, diagonal, toward + punch). Even if it requires multiple inputs to execute, it's still a single move, rather than multiple moves chained together.

Combo is a term that can be used loosely out in the wild; many uses of the word likely do not fit on this article (but perhaps on the Combination Attack article). However, feel free to add parodies or other examples that contain some aspects of combos (just be sure to label them as such). Rhythm game chains and puzzle game chains are not combos, nor are the combination attacks found in Chrono Trigger. Not to be confused with delicious cylindrical snack crackers with cheezy filling

. Nor is it about getting fries and a drink with your burger.