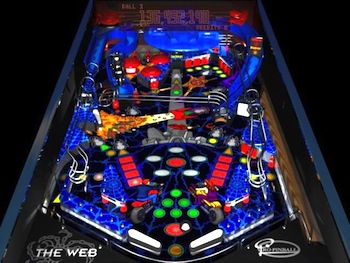 "You can’t win!"
You are a Cyber Biker in the near future. High above the earth in her Space Station sits the evil ruler of The Web, the Dark Queen. You must battle through numerous missions and tasks to earn the chance to defeat her in the Ultimate Showdown.
On your way to the Showdown you will do battle in The Web itself (a fast paced 3D video mode), you'll have to find a way to destroy the Space Station in the Space Station Frenzy (a three ball mode), and master combo shots to take on Combo Mania (a special high scoring round).
Advertisement:
Only when you have completed FIVE special tasks will the Ultimate Showdown (an incredible SIX ball frenzy) be ready for you — will you be ready for it?

The first game in the Pro Pinball series is Pro Pinball: The Web. It was originally released in 1996 for the IBM Personal Computer, then later ported to the Apple Macintosh, PlayStation, and Sega Saturn.

The nominal story of The Web casts the player as a motorcycle rider who has been sent out to challenge the "Dark Queen". This enigmatic woman is out to Take Over the World by infesting everything with her spiders. Now the player must stop her by racing bikes, stopping a shuttle, raiding skyscrapers, and doing various other odd tasks until they can reach the Ultimate Showdown and stop her once and for all...

Upon its release, The Web was lauded as one of the most realistic digital pinball games ever; subsequent Pro Pinball titles have eclipsed it with their more complex gameplay, but the game still holds up today and is fondly remembered by many fans.