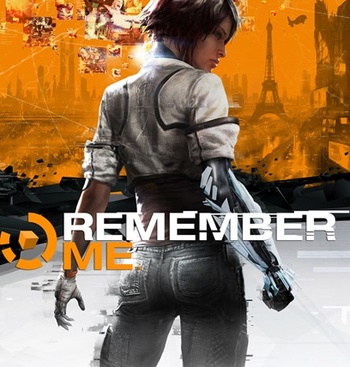 Remember Me is a 2013 action-adventure game from DONTNOD Entertainment and Capcom, released for PC, PlayStation 3 and Xbox 360.

The story takes place in the year 2084, set in a futuristic Paris known as "Neo-Paris," a sprawling, beautiful, vibrant metropolis, made rich and prosperous with the development of a revolutionary new technology known as the Sensation Engine. Developed by the Memorize Corporation, the "Sensen" — as it's widely called — is a brain implant that allows people to alter their memories, deleting them, sharing them via the wireless pervasive 'Net, trading them, or even buying new ones that are distributed by Memorize, which acts as a central hub to store these memories. This has allowed the corporation to turn Neo-Paris into their own private surveillance state of sorts, with the interconnectivity giving them a vast degree of control over the population.

The hero of our story is Nilin, a "memory hunter" (a person specializing in targeting and stealing memories) in a resistance against Memorize, who is unique among her fellow hunters because of her ability to manipulate others' memories by diving into them and changing minute details to create an alternate reality for that person to remember. Nilin is captured by Memorize and has most of her memories erased, before being imprisoned in the super-maximum-security prison "La Bastille." Here, she's contacted by a mysterious hacker called "Edge," a leader of a guerilla revolutionary movement known as "The Errorists," who seek to bring to light the corruption of Memorize and hopefully bring the company down. With Edge's help, Nilin escapes into the underground and fights off waves of mutants known as "Leapers" — once people who became so addicted to their Sensen it degraded and changed them — until she resurfaces in the slums of Neo-Paris, where she officially rejoins Edge's cause.

Nilin's personal goals, however, are to recover her lost memories and find out exactly what happened to her, hoping to clear herself of her status as a fugitive.

After all, she is the hunter. So why now has she become "the hunted?"

Not to confuse with the drama film, or the song with the same name in Coco.