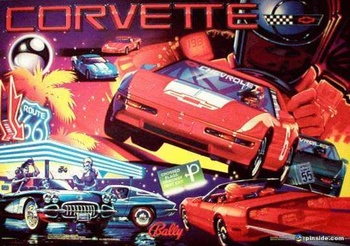 Corvette is a Physical Pinball Table released by Williams Electronics (under the Bally label) in 1994. Illustrated by Dan Hughes, this is the first pinball game from veteran arcade game developer George Gomez.

The game was released to commemorate the 40th anniversary of the Chevrolet Corvette. The player's objective is to collect nine classic Corvettes, from the 1953 Blue Flame Six and 1963 Grand Sport to the 1982 Collector Edition L-83 and the 1993 ZR-1 40th Anniversary LT-5. Cars are collected by driving down Route 66, winning Drag Races, and defeating six sexy models on thirteen international tracks in the Challenges. Along the way, fire up the Turbo Boost for extra racing speed, collect the Spark Plug rewards, make a Pit In before your tire blows, then shake the table by revving up the LT-5 engine for a Super Jackpot before locking balls for multiball. Collect all nine cars, then assemble the jigsaw puzzle to get the 1997 Corvette Test Car prototype.

Corvette is considered an impressive debut game from George Gomez, and is highly rated among both pinball enthusiasts and car buffs. The action is fast but somewhat forgiving, with satisfying shots and a modest ruleset that entertains beginners while challenging experts. On the downside, the playfield can feel cluttered with all the toys and ramps, and the generic rock music gets repetitive quickly.

In September 1994, Bally sponsored the grand opening of the National Corvette Museum in Kentucky, and provided several games for attendees to play. Exactly 5,001 tables were made, with many finding their way into the homes of Corvette enthusiasts.