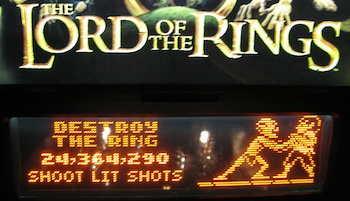 Maybe it should be called "Gandalf mode" instead?
"You have come to the end of your journey. Survival is everything."
— Rod Serling introducing "Lost in the Zone", The Twilight Zone
Advertisement:

In Pinball games, a Wizard Mode is a special game mode or bonus stage which can only be started after completing a long and difficult series of tasks. It is named as a sideways tribute to The Who's Tommy, since the idea is that only a Pinball Wizard could reach such a level to begin with.

Some games will make completing the Wizard Mode reward a Progressive Jackpot, as an extra incentive to players. Other games may have multiple Wizard Modes (called "sub-Wizard Modes" or "mini-Wizard Modes" by fans), to further recognize and award more "intermediate" players; usually such modes are stepping stones to the game's true Wizard Mode.

Unlike a Final Boss, however, finishing the Wizard Mode will seldom end the game. Instead, the game will resume with an earlier state, giving players the opportunity to reach (and beat) the Wizard Mode again.

As this trope is all about the endgame of a pinball table, there will be unmarked spoilers. Don't say you were warned!