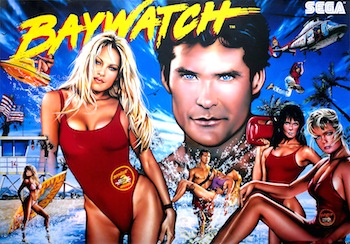 David Hasselhoff is watching you play Baywatch.
Mitch: "Check it out, guys. We've got a tidal wave coming."
Advertisement:

Baywatch is a 1995 arcade pinball game based on the world-famous television series from The '90s. Designed by Joe Balcer and Joe Kaminkow, with artwork by Markus Rothkranz and Jeff Busch, it was the second game from the newly-formed Sega Pinball.

Set in the sun and surf of Southern California, the game casts the player as one of the Baywatch lifeguards, working with Mitch, C.J., Stephanie, Matt, and Caroline on various beachside adventures. Perform CPR on drowning victims, rescue trapped Divers, and watch out for the Tidal Wave. Visit Venice Beach and Shark Cove, go jet skiing, then activate the automatic Shark Fin Flipper to help out during Tourist Season. Lock pinballs in the Guard Tower for multiball, prove yourself in the Ironman Competition, collect all the vehicles for the Search and Rescue, then ride out the Earthquake and look great while doing so. The large DMD features near-photorealistic animated clips, while David Hasselhoff provides custom voice work. Up to six players can compete, including an option for two-on-two "doubles mode".

While some dismiss Baywatch for its blatantly exploitative license, those who've looked past the theme have discovered that it's actually a fun, fast game with lots of interesting shots, some tough challenges, and a deep but understandable ruleset. For its fans, Baywatch isn't a Guilty Pleasure as much as it's just a great table that happens to have some lovely Fanservice accompanying it.

Custom copies of the Baywatch pinball game were given to Hasselhoff and key producers of the TV series. In March 2014, Hasselhoff worked with Julien's Auctions and the television show Celebrity Home Raiders to auction off his table

. It was eventually sold for $4,160, and the proceeds benefitted the Starlight Children's Foundation.