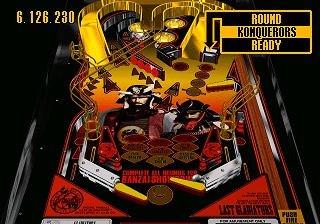 "We who are about to die, salute you!"
Advertisement:

Last Gladiators is a video pinball game by KAZe Co. Ltd., originally released for the Sega Saturn in 1995.

As with KAZe's earlier Super Pinball games, the tables are presented as pre-rendered playfields with superimposed graphics for the playfield targets and lights, with an impressively realistic physics engine at the core. The game itself consists of four original tables, all loosely tied with warrior themes:

The gameplay is accompanied by an assortment of sound effects, voice clips, and over 80 music tracks, including original hard rock compositions by Doug Aldrich of Whitesnake.

A port of Last Gladiators was released for iOS devices in 2009; "Gladiators" is included in the price, while the remaining tables could be unlocked as in-game purchases.

Not to be confused with Gladiators, a similarly-named pinball table.