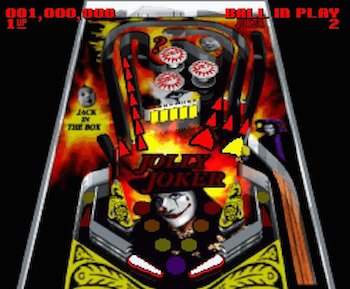 Super Pinball: Behind The Mask is a pinball video game for the Super Nintendo Entertainment System. It was developed by KAZe Co. Ltd. and released in 1994. The game consisted of three original tables:
Advertisement:

All of the games featured realistic physics and game action, eschewing Video Game-only features in exchange for a sense of speed and flow comparable to that of Real Life pinball tables. Each game is presented as a pre-rendered playfield with superimposed sprites for targets and lights, giving smooth action at the cost of a single predefined camera position.

The layouts of the Super Pinball tables are respectably designed, though lacking more complex elements such as ramps or elevated playfields. As a result, they tend to feel similar to each other, with the main difference being the placement of the bumpers and lanes. 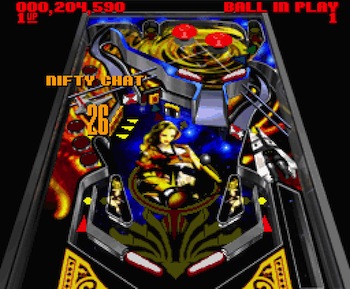 A sequel, Super Pinball II: The Amazing Odyssey, was released a year later for the SNES. Unlike the original, it was only available in Japan. Once more, it consisted of three original tables:

The game engine remained largely the same, though the tables now featured ramps and elevated playfields. As a result. the playfield action feels slightly slower and more stop-and-go compared to the original, but the individual games themselves felt more distinctive.