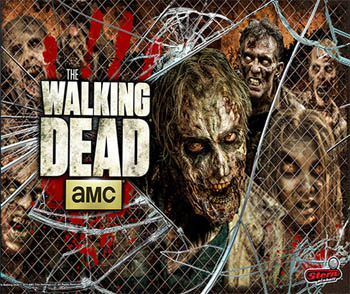 The Walking Dead is an arcade pinball machine based on the popular Zombie Apocalypse live-action television series. It was designed by John Borg, illustrated by Greg Freres and Kevin O'Connor, and released in October 2014 by Stern Pinball.

In this game, the player joins Rick Grimes and his group of survivors as they try to make it in a Crapsack World overrun with zombies. Collect Food, Weapons, and First Aid supplies, visit Woodbury, the Prison, and the Tower, then load up on various weapons in case a Riot breaks out. Venture to the Arena, Cell Block C, the CDC, and the Tunnel, battle the Prison Walkers and the bloated Well Walker, and don't hesitate to stab, shoot, or bash the undead wherever they appear. Load up the unfolding crossbow and shoot it at targets across the playfield, then start a Multikill spree for maximum damage. The frightful mood is enhanced with music from the show and playfield toys sculpted by executive producer Gregory Nicotero.

The Walking Dead is available in both a regular ("Pro") edition, and pricier Limited and Premium Editions. The latter two versions include an extra magnet and drop target, spinners, custom artwork and trim, a fish tank with zombie heads, a fold-out crossbow launcher, and a "Bicycle Girl" bash toy on the left ramp, as well as multi-color LED general illumination.

Not to be confused with the Walking Dead Digital Pinball Table, which is based on Telltale Games' The Walking Dead: Season One and is available through Zen Pinball. For more information about that table, click here.

Daryl: "Come on, man, there are more walkers to kill!"