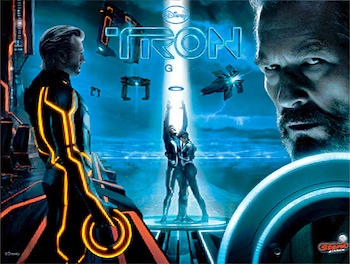 "Oh man, I'm all over this!"
Advertisement:

TRON: Legacy is a pinball based on the movie of the same name. It was designed by John Borg of Stern Pinball, illustrated by John Youssi, and released in August 2011.

The game casts the player as Sam Flynn, who has inadvertently entered the digital world of The Grid while searching for his missing father Kevin. Not only does Sam find his dad and the ISO Quorra, but he's also attracted the attention of Clu and his mysterious enforcer, Rinzler. To escape, Sam and Quorra must now make their way through Clu and his followers, race light cycles, dodge Recognizers, and survive the Disc Battles to reach the Portal and return to the real world.

As expected from a Licensed Game, the game liberally uses voices, videos, and music from the movie. The pinball itself was released in four different editions, each distinguished by different translite displays on the backbox. The first two releases also allowed operators to install an optional shaker motor in the game cabinet.

This pinball provides examples of the following tropes: