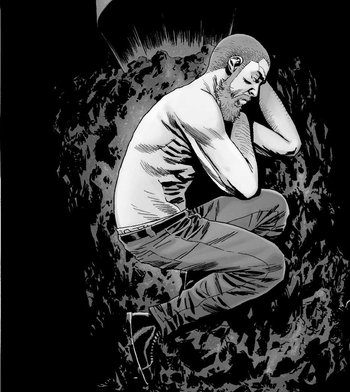 Uneasy lies the head that wears a crown.
The Walking Dead highlights the worst aspects of human nature are shown because of a zombie invasion. It's safe to say that there will be moments like this.
Advertisement:

For the TV show, see here.

For the video game, see here.

Volume 2: Miles Behind us

Volume 7: The Calm Before

Volume 8: Made To Suffer

Volume 10: What We Become

Volume 17: Something To Fear

Rise Of The Governor

The Road To Woodbury

Fall Of The Governor