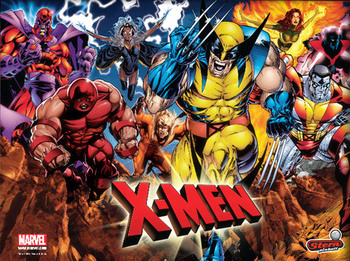 The Ultimate Mutant Battle Begins!
"Back off, bub."
— Wolverine
Advertisement:

X-Men is an arcade pinball machine designed by John Borg and illustrated by Kevin O'Connor and Stephen Jensen. It was released in 2012 by Stern Pinball.

In this game, the player must assemble eight of Professor Xavier's X-Men, then lead them to triumph against their various enemies. Catch Nightcrawler as he teleports around the field, ricochet pinballs against Gambit's playing cards, then slide down Iceman's ramp and brawl with Wolverine. Start Magneto Multiball and get past his magnetic defenses to challenge the Brotherhood, then go up against the Hellfire Club, Sabretooth, the Shadow King, Omega Red, the Juggernaut, and the Sentinels. Chain your teammates together in powerful Combos, then test their mettle in the Danger Room and against Dark Phoenix in a point-scoring frenzy.

In addition to the basic "Pro" table, X-Men was also available in Wolverine Blue and Magneto Red Limited Editions. Along with custom backbox translite art and color-coordinated metalwork, these games included a magnetic spinning disc and a swing-out Ice Slide that sends balls across the playfield.

Not to be confused with the X-Men Digital Pinball Table contained in Zen Pinball.

Wolverine: "You're gonna have to do better than that against me!"