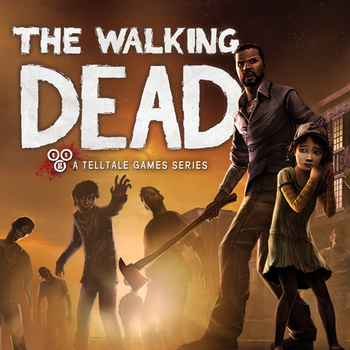 "I'll protect her no matter what."
Lee: Hey, you're strong, Clem. You... you can do anything.
Clementine: But... I'm little.
Lee: Doesn't mean nothing. You're gonna see bad stuff. But it's okay.
— (No Time Left)
Advertisement:

Season One follows Lee Everett, a former history professor turned convicted criminal, who is given a second chance at life after he escapes transport to prison during the outset of the Zombie Apocalypse. Taking a little girl named Clementine under his wing, the two set out to find safety in the new, more dangerous world.

Be warned: with all episodes of Season One now released, this article will have spoilers, and some may be unmarked. Proceed at your own discretion.