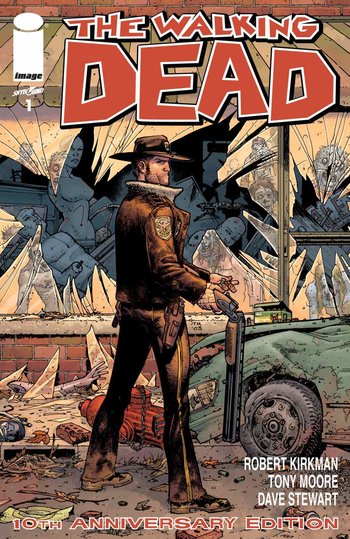 "You think we hide behind walls to protect us from the walking dead! Don't you get it? We ARE the walking dead!"
"One of the most compelling aspects of The Walking Dead comic was watching Generic Good Guy Rick being slowly but completely ruined by a lawless world. He started off as a cliche small town sheriff, sure, but only because it was fun to explore exactly what it takes to break Andy Griffith's mind and make him eat the rest of Mayberry."
— Robert Brockway,

The Walking Dead is a zombie apocalypse comic book, written by Robert Kirkman with art by Charlie Adlard,note Tony Moore did the first six issues featuring an ensemble cast (which is constantly in flux) of survivors struggling to survive over the long-term duration of the zombie uprising. The de facto main character is Rick Grimes, a police officer who was shot in the line of duty; when he wakes up from a Convenient Coma, all hell has broken loose. Rick goes in search of his family and safety, both of which end up being more tenuous than not.

While most zombie apocalypse comic books focus on More Dakka and improbable fighting skills in order to showcase Big Damn Heroes, The Walking Dead focuses more of its action on survival horror and the psychological and personal relationships which result from the stress of being constantly on guard. As one critic (and the main character himself, eventually) put it, the title is specifically not referring to the zombies, but the survivors.

The series began in October 2003 to great fanfare. In June 2019, it was revealed that the series would come to its conclusion with July 2019's Issue #193 — a giant-sized issue — ending a 16-year run in as an abrupt fashion as the deaths of many of the comic's lead characters. However, Kirkman noted that this was a stylistic decision and his intended ending, and he even commissioned a few covers for fake issues past #193 in order to preserve the big plot twist in the final three issues.

There is also a live action television series that is based on, but also deviates a bit from the comic; it has its own page. There is also an episodic adventure game series by Telltale Games set in the same universe as the comic. It also has its own page. Kirkman has also co-written a planned trilogy of prequel novels to the series, the first one being Rise of the Governor. The second, The Road to Woodbury, was released in October 2012 and the final novel of the Governor trilogy, The Fall of the Governor in 2013. Subsequent releases have been Descent and Invasion, with others likely on the way.

There is a shout out page here.

The Walking Dead contains examples of:

"Wherever you are, whatever you're doing... you're there and you're safe because of Rick Grimes."