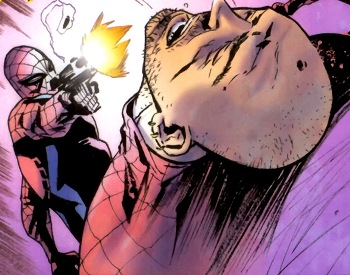 Spider-Mannote actually The Punisher and his assistantnote some mook demonstrating the new and improved Uncle Lee's No Mess Bullets!™
"And the men of the First Shikaris
Picked up their Subaltern dead,
With a big blue mark in his forehead
And the back blown out of his head."
— Rudyard Kipling, The Grave of the Hundred Head
Advertisement:

Whenever someone gets shot in the head on TV, what generally happens is that they end up with a little hole in their head - and that's generally it. There may be a little blood on the wall behind them, implying a fairly gory exit wound, but not one you're likely to see.

In Real Life, a headshot virtually never leaves a neat little exit wound (the entrance wound may, however, be very "neat" in appearance). There is either no exit wound at all (the result of a low-powered or small round, or a shot from long range), or a pretty serious chunk of the skull is blown away by the exiting bullet (high-powered or large caliber bullets or a close-in shotgun blast). If the round doesn't exit the skull, the blood will be mostly around the entry wound, with possibly a bit of spatter if the victim jerked or twitched. If there is an exit wound, there's going to be bits of bone, brains, and blood (and maybe teeth) all over. Often it's implied that the neat little hole we're seeing is the entry wound, and You Do NOT Want to Know what it looks like from the other side — sometimes this will be lampshaded in order to keep the gore down while at least paying lip service to the messy reality.

Generally subverted in video games, where bullet wounds will often be represented by a large and messy blood texture placed over the point of impact on the target's model (and a healthy splash of red on the nearest wall behind them), and anything bigger than a pistol will frequently have the capacity to cause more obvious damage. The head usually still remains intact, though.

Contrary to popular belief, a gunshot wound to the head is not actually always fatal in and of itself, nor is it an Instant Death Bullet. Probably the most famous example of this was the head wound of Phineas Gage,

who managed to survive a three-foot-long steel rod through his brain (not without ill effects though). For more details, see the Analysis page.

This sort of head shot has a startling tendency to occur exactly in the center of the forehead, especially when it would be unlikely, or even impossible to hit there.

It's generally a holdover from the days when Bloodless Carnage was the rule and is still often used to avoid getting a more restrictive rating than the producers of the show want.

Has nothing to do with Pretty Little Liars (unless, of course, there's gunplay going on).

Boom, Headshot! is required for this trope to happen. See also Bloodless Carnage, Magic Bullets and Moe Greene Special. Contrast Pink Mist and Your Head A-Splode. This is very unlikely to happen if the victim Ate His Gun.