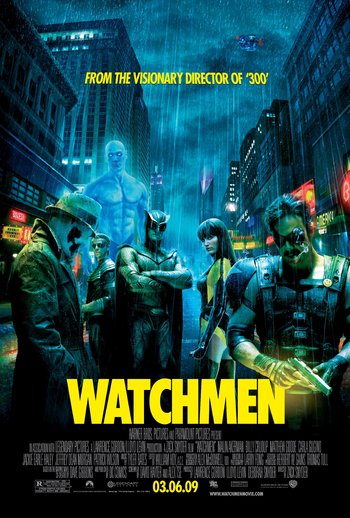 "Never compromise. Not even in the face of Armageddon."
"The streets are extended gutters, and the gutters are full of blood. And when the drains finally scab over, all the vermin will drown...."
— Excerpt from Rorschach's Journal, October 12, 1985
Advertisement:

Watchmen is the 2009 Film Adaptation of Alan Moore and Dave Gibbons' Watchmen, directed by Zack Snyder.

After almost 20 years in development limbo (including a script by David Hayter, a.k.a. Solid Snake, and not one, but two attempts by Terry Gilliam), the movie was eventually made and released, using a script by Alex Tse which preserves some of Hayter's elements.

The story follows the comic really closely, with dialogue and scenes lifted shot-for-shot at times. There are only a handful of alterations, much of it removing excess backstory and subplots to streamline the story, with the primary change being key elements of the villains plan at the end. That makes it probably the most accurate adaptation of an Alan Moore comic (with the possible exception of the Justice League episode "For the Man Who Has Everything") and one of the most comics-accurate adaptations ever made overall.

This page is for movie-only tropes — most will be on the main Watchmen page. Similarly, movie-specific character tropes go here.

Advertisement:
"Who watches the Watchmen?"
Feedback