In Prison with the Rogues 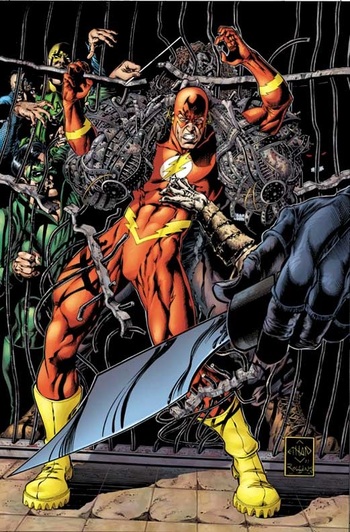 Dead man walking!
"If you're thirsty for vengeance, you might wanna start with... The Flash. Barry Allen is The Flash, the same man who put you behind bars, and who will no doubt recapture you after you escape. That was probably his plan all along."
— Warden Wolfe, The Flash
Advertisement:

Things are looking bad for The Hero. They've racked up a bad reputation and are wanted by the cops, which eventually culminates in their arrest. So our hero is going to spend a while behind bars, until they either escape or clear their name, but it doesn't end there. What's the one thing worse than being locked up in prison? Being locked in prison with your Rogues Gallery. For whatever reason, the authorities feel like it's a good idea to put the hero in the same prison that is housing criminals the hero previously helped locked up. Sometimes it's justified in that the prison is required to have very high levels of security to contain the rogues and similar levels are deemed necessary to hold the hero. So now the hero is held in a compound with their worst enemies, all eager to tear them apart. As the hero is walked down the hallway, they pass by rows of cells with their rogues reaching out their arms and yelling scornfully at the do-gooder who put them in here.

This usually results in the inevitable breakout where the criminals escape confinement and the hero is forced to face off against all of their jailed rogues at once. Though worth noting, sometimes there are instances where a hero isn't imprisoned with their PERSONAL rogues, especially with cases of Knight Templars who do not tend to let their criminals live long enough to be incarcerated.

A Kangaroo Court can ensue if the hero's rogues actually take over the prison while he's there and decide to exact revenge on him in a way that mocks the judicial system that incarcerated them there in the first place.

Compare Conveniently Cellmates where the hero is put in the same cell as one of their enemies, which may or may not overlap with this. See also You All Meet in a Cell and Pariah Prisoner. It can result in an Enemy Mine if they band together to escape.