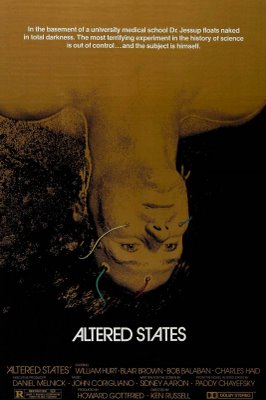 Eddie Jessup: Memory is energy! It doesn't disappear - it's still in there. There's a physiological pathway to our earlier consciousnesses. There has to be; and I'm telling you it's in the goddamned limbic system.
Mason Parrish: You're a whacko!
Eddie Jessup: What's whacko about it, Mason? I'm a man in search of his True Self. How archetypically American can you get? We're all trying to fulfill ourselves, understand ourselves, get in touch with ourselves, face the reality of ourselves, explore ourselves, expand ourselves. Ever since we dispensed with God we've got nothing but ourselves to explain this meaningless horror of life.
Advertisement:
Emily Jessup: He doesn't love me. He never loved me. I was never real to him. Nothing in the human experience is real to him.

Warning: This Synopsis is spoiler-heavy.

Altered States is a 1980 film (which some have called a vicarious LSD Experience) directed by Ken Russell (who took up the project of adapting Paddy Chayefsky's novel for the screen after the first director quit due to creative differences with Chayefsky).

The film takes places over several years, following the life of Eddie Jessup (William Hurt), a brilliant research scientist who believes that altered states of consciousness are as real as every day reality, and investigates the religious experience in schizophrenics. He and his friend and fellow scientist Arthur, played by Bob Balaban, experiment with altered states of consciousness using isolation tank studies. Jessup marries a Hot Scientist note  hot physical anthropologist, actually , Emily, played by Blair Brown. They have two daughters together, but the marriage is strained by her groundedness and his wild, out-there intellectual passions.

During a marital separation, she travels to Africa to study baboons while he goes to Mexico and participates in a mushroom ceremony with a tribe of natives called the Hinchi Indians. On the mushroom drug, Eddie experiences a kind of jumbled psychological regression to the first soul- that spark of consciousness which he believes gave rise to all creation, from the Big Bang to the origin of life on Earth. He takes the drug back to the United States for testing, where he intensifies the effects of the mushroom chemicals with sensory deprivation. He emerges from one test mentally regressed, unable to speak except for primitive grunts and clicks. An X-ray reveals Simian characteristics. Jessup is convinced that he de-differentiated his genetic structure, that the altered state of his more primitive consciousness physically manifested.

Ignoring the warnings of all concerned parties, he tries it again... and emerges as a fur-covered, vicious ape-man, presumably a manifestation of the primitive hominid consciousness he contacts inside the isolation tank. He breaks out of the basement of the medical school where the isolation tank is kept, attacks a security guard, and chases a pack of wild dogs to the local zoo, where he kills and eats a raw sheep. When his humanity returns, he convinces his concerned friends to monitor one last isolation tank trip.

During the study, something happens, and the primordial consciousness of Jessup's obsession nearly destroys the laboratory. Inside the tank, Jessup regresses in a mass of primordial matter. He is only brought back to reality/modernity/whatever by his love for Emily, with whom he is last seen in bed with... both of them switching back and forth between their cognitive selves and masses of sexually ecstatic, fiery, oozy, lumpy, swirling blobs of proto-matter, while their friends argue about the validity of Jessup's experience, the scientific ramifications, and how to cover up their own foolishness.