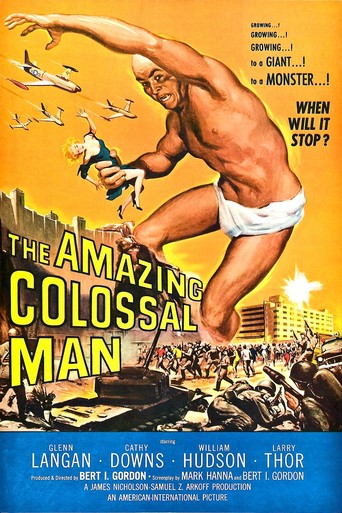 "What sin could a man commit in a single lifetime to bring this upon himself?"
— Lt. Colonel Glenn Manning
Advertisement:

The Amazing Colossal Man is a giant monster movie made in 1957, directed and produced by Bert I. Gordon and released by American International Pictures as a double feature with Cat Girl; it's also a Trope Codifier for "Attack of the 50-Foot Whatever".

Lieutenant Colonel Glenn Manning, Korean War veteran, is one of the lucky soldiers sitting in the trenches waiting to witness the test of a new nuclear weapon, a "plutonium bomb". The bomb doesn't go off when it's triggered, and Glenn gets caught in the blast when he races to rescue the pilot of a plane that crashes in the test area. It seems to be enough of a miracle for him to be found alive with severe third degree burns, but... well, this is how The Incredible Hulk got started.

Sure enough, his burns are miraculously healed the next day; and soon after that Glenn's fiancee learns he's been spirited away from his original hospital to an abandoned medical facility in the desert. Traveling there, she does eventually learn that exposure to the bomb has caused Glenn's body to grow out of control and he's become a giant. And, he's continuing to grow at an alarming rate. Even worse, since his heart's a single cell, it's not keeping up with the rest of him, causing fainting spells, chest pain, the risk of eventual death... oh, and mental trauma on top of the obvious problems of being fifty feet tall.

Eventually, Glenn goes insane, kills one of the doctors trying to cure his growth, kidnaps his fiancee, and rampages through Las Vegas before being taken down by the Army.

The film spent quite a bit of time justifying tropes like I Love Nuclear Power audiences now take for granted. It also went into detail about Glenn's growing angst and insanity caused by his condition.

A sequel, War of the Colossal Beast, was released by AIP in 1958 with Attack of the Puppet People. In this installment, Glenn is found alive in Mexico after the events of the first film, scarred, mindless, and hunting bread trucks to survive; his ever-devoted fiancee sister finds him and leads the U.S. military to bring him back to Los Angeles. They can't restore Glenn's memory, and he inevitably goes on another rampage. Glenn's sister talks the Beast into freeing a bus of students he held captive, and Glenn, suddenly regaining his humanity, commits suicide by electrical power lines, somehow both disintegrating himself and turning the film from black-and-white to color for the last minute.

Contrast with The Incredible Shrinking Man.

For the Mystery Science Theater 3000 versions of these films, please see the following episode recaps:

The Amazing Colossal Man and War of the Colossal Beast contain examples of:

War of the Colossal Beast has examples of: