Film / Beyond the Black Rainbow 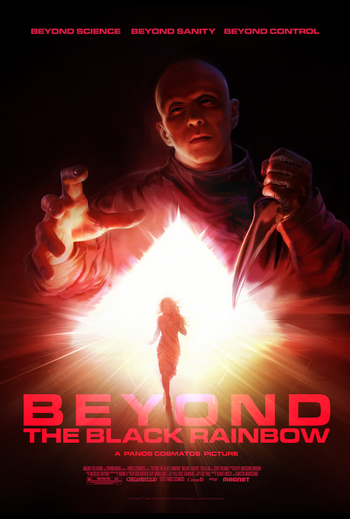 A State Of Mind / A Way Of Being

Hello. My name is Dr. Mercurio Arboria, and I am the founder of the Arboria Institute. It has long been my dream to find the perfect way for people to achieve, simply, happiness. Contentment. Inner peace. These seem to be things that, strangely, elude us all — but it doesn't have to be that way. We at Arboria have found a path to achieve them.
Advertisement:

Beyond the Black Rainbow is a 2010 Science Fiction Psychological Thriller film, with a side of Surreal Horror. It is the debut film by Canadian writer and director Panos Cosmatos (Mandy (2018)).

Set in 1983, the film follows a girl named Elena (Eva Allan), a telepath studied and locked inside a New Age research compound, and the unstable therapist, Dr. Barry Nyle (Michael Rogers), that supervises her. Things start getting astoundingly weirder very quickly. The film is shot in the deliberately slow, sterile, and excessively polished style of '70s cold sci-fi movies, such as THX 1138 and Solaris, as well as 1980s cinema that continues in a similar vein such as Scanners. It also features a mostly Drone of Dread score.