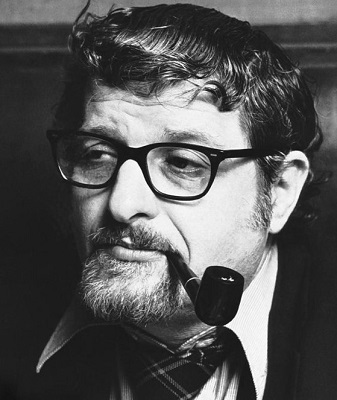 The son of Jewish immigrants from Russia, he graduated from college with an accounting degree (and moonlighted as a semi-pro football player) before serving in the Army in World War II (where he won a Purple Heart).

Writing prolifically after the war, he achieved a small breakthrough in 1951 when one of his short stories was adapted into the film As Young as You Feel (which featured an early role for Marilyn Monroe). Then he made his name as a writer of live TV dramas, based on Slice of Life portrayals of everyday America. One of these, Marty, was adapted into a succesful movie, which made him one of the most in-demand writers in Hollywood. He became disillusioned with television, feeling the networks were no longer interested in quality shows, though he still made occasional attempts at selling pilots (The Hospital was an expansion of a pilot script he failed to sell, and the UBS Network was created a few years before Network in a rejected pilot for a series about a network executive) . He also had success on Broadway with the plays Middle of the Night and The Tenth Man.

But his modern reputation is based on the trio of screenplays he wrote in The '60s and The '70s: The Americanization of Emily and The Hospital (both directed by Arthur Hiller) and Network (directed by Sidney Lumet). All three follow a similar template: scathing satires about major American institutions (the military, the health care system, network television), where a deeply-flawed Anti-Hero finds himself grappling with his superiors, who are determined to violate the rules of basic human decency for their own gain. He peppered this with genuine human drama, Black Comedy, and witty, literate dialogue, often stopping the action for charged conversations or revealing, highly-quotable monologues. If that all sounds familiar, it's because Aaron Sorkin has frequently cited Chayefsky as a major influence.

He died of cancer at age 58, but his stature has grown in the decades since, with his films (especially Network) seeming downright-prophetic in the way they presented how the previously-unthinkable can become reality because of the Skewed Priorities of people.

Odd trivia: he attended the same high school (and graduated in the same class) as Stan Lee (they didn't know each other, but Lee was a big fan of Chayefsky).

Films written by Paddy Chayefsky with pages on TV Tropes: