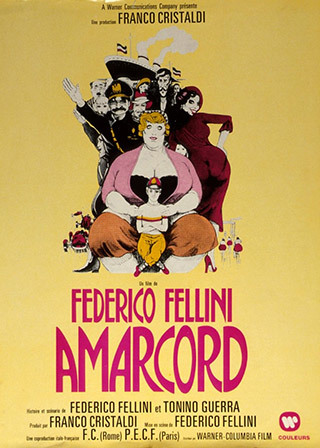 "Fellini brought to maturity this conviction. That in order to extract profound truth from the reality of the phenomenal world that appears before us, you must reinvent that reality"
— Vittorio Boarini, Director of the Fellini Foundation
Advertisement:

How does one go about describing such a movie? This is surely among Federico Fellini's best movies, exquisitely filmed and with a haunting soundtrack by Nino Rota that might follow you for the rest of your life. It is also a movie so fantastically nostalgic, filled with wondrous, larger-than-life characters, with an almost universal appeal. It's probably one of those movies that's best experienced.

The plot itself is largely autobiographical, from Fellini's own memories as a child growing up in Fascist Italy. It can be said to be the story of that an small Italian town of Borgo during the Benito Mussolini dictatorship. It mostly focuses on a 'typical' Italian family and their numerous mishaps, but there are many, many side-characters and side-stories...

It was widely praised at the time of its release, being exceptionally well received by critics (some even calling it a instant classic) and winning the Oscar for best foreign language film, and to this day it tends to appear in 'best of all time' lists, with merit.

Also notable as the first film given the Letterbox treatment in a home video release (the 1984 CED edition).