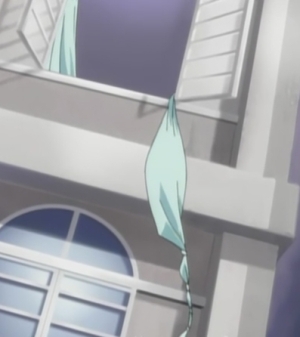 A character is stuck in a room for any reason. The room has a bed and a window. The prisoner makes a rope using the sheets off the bed and climbs out the window.

Realistically speaking, there should be three snags to this plan. The first snag is that, unless said room also has a linen closet filled with several other sheets, the character shouldn't be able to make a long enough rope. This never happens, whether they're in a second-story bedroom or in a cell in the 30-stories tall Evil Tower of Ominousness.

The second snag that never occurs should be getting the window open. Has no one ever heard of glass, locks, or bars? (Of course, if they have, the solution may be for someone to send them a cake with a file in.)

The third snag is doing it without being seen. Good thing The Guards Must Be Crazy.

A princess, especially a Rebellious Princess, will frequently do this. That goes double if she's a Girl in the Tower. Some cases may involve the character sacrificing pieces of their own clothing to make the ladder.