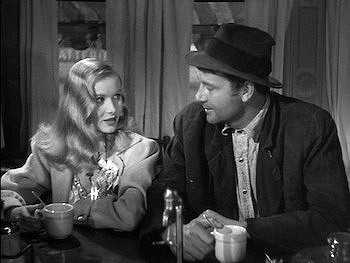 ”Why, Mr. Smearcase, aren't you getting a little familiar?”
"There's a lot to be said for making people laugh. Did you know that that's all some people have? It isn't much, but it's better than nothing in this cockeyed caravan."
Advertisement:

John L. Sullivan (McCrea) is a hotshot young Hollywood director who's been pigeonholed in comedy but desires the chance to adapt O Brother, Where Art Thou?, a socially relevant novel he admires. Feeling the only way he can make his desire a reality is to gain experience in poverty and hardship, Sullivan dresses as a hobo and sets out with nothing but ten cents in his pocket to experience "the real America". Unfortunately, studio bigwigs fear for their favorite director's safety, and they cushion him every step of the way. Until things go horribly wrong, that is.

A landmark satire of Hollywood. Not appreciated when it was first released, it manages to captivate audiences decades later with roller-coaster storytelling and with cleverness on an epic scale. "The Girl" is Veronica Lake's most memorable role, placing her in the big leagues with Katharine Hepburn and Ingrid Bergman. The Coen Brothers often steal ideas from Sullivan's Travels for their similarly funny masterworks, most obviously when they made a real movie called O Brother, Where Art Thou?.

Incidentally, the shot of Sullivan travelling down the road as he begins his journey went on to inspire the logo for Caravan Pictures (the page quote above is where the company's name comes from). Company co-founder Joe Roth must be a fan of Sturges, as he previously worked at Morgan Creek— named after The Miracle of Morgan's Creek.