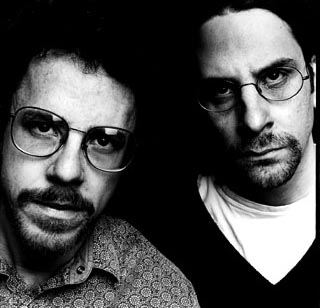 Serious men.note Ethan on the left, Joel on the right
Advertisement:

Joel David Coen (born November 29, 1954) and Ethan Jesse Coen (born September 21, 1957) have been making films and thumbing their noses at traditional genre boundaries since 1984. Bouncing from Film Noir to screwball comedy, from quirky indies to big-budget studio pieces, they function as a two-man writer-director-producer-editor Sibling Team.

The brothers are known for their meticulous planning, not least the incredibly detailed storyboards they create for every shot of every film. This saves time during production (as they can show their cinematographer exactly what they want done) and makes the films look unbelievably cool.

Joel has been married to actress Frances McDormand - whom he met on the set of their first film Blood Simple - since 1984. She's appeared in seven of their films, including Fargo for which she won the Academy Award for Best Actress. She said of the event "After all these years sleeping with the director, it's finally paid off." Ethan has been married to Tricia Cooke since 1990, who worked as an editor on several of the brothers' films.

Films written and directed by the Coens:

The Coen Brothers and their films provide examples of: