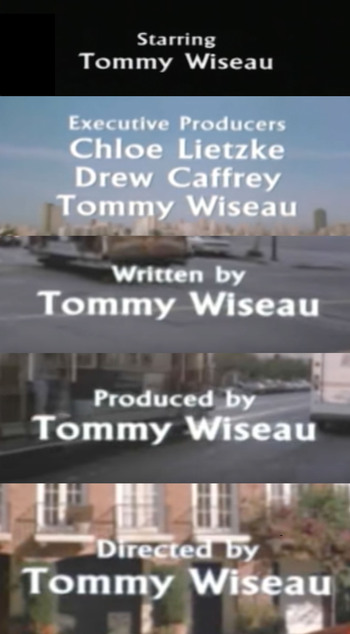 And that's not even including the Wiseau Films logo at the start.
"'Written-Produced-Directed'; the poor guy wasn't smart enough to spread the blame around."
— RiffTrax about Plan 9 from Outer Space and its writer/producer/director Ed Wood
Advertisement:

In most productions of film, television, and theatre, the work is split up between a large number of people, mostly because individuals tend to specialize in a specific part of the artistic process. Some are actors, others writers, editors, etc.

This is often seen as a sign of dedication or ego, but what can't be denied is that the presence of a Copiously Credited Creator almost always indicates that whoever holds the credits is Doing It for the Art. Also, various union affiliations or distribution platforms can require that various production-related roles be included in the credits which can actually mandate that the same person is listed several times.

Instances of when a Copiously Credited Creator's project goes sideways due to the creator's runaway ego and lack of talent are covered in the Vanity Project sub-trope.

On "The Red Green Show," the "Ranger Gord's Educational Films" animated segments are said to be written, directed, animated and voiced by Ranger Gord. Oh, and starring Ranger Gord.

On "The Red Green Show," the "Ranger Gord's Educational Films" animated segments are said to be written, directed, animated and voiced by Ranger Gord. Oh, and starring Ranger Gord.