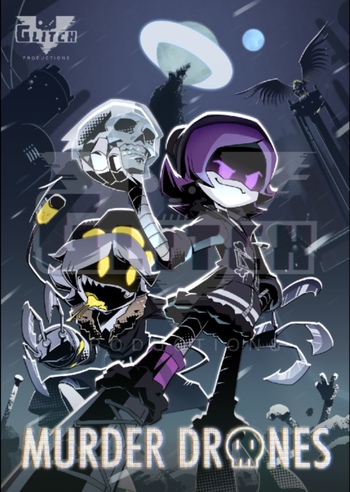 Murder Drones is a CG animated Sci-Fi Horror/Comedy web series created by Liam Vickers (Cliffside, Internecion Cube) and produced by Kevin and Luke Lerdwichagul's Glitch Productions (SMG4, Meta Runner, Sunset Paradise). It is the third fully-animated series by Glitch, and the first to be created by someone other than Kevin and Luke, as well as the first to have no ties to their main SMG4 series.

In the distant future, Earth has been mining exoplanets for resources, aided by a legion of Worker Drones. Then one day, a core collapse wipes out all the humans on the exoplanet Copper 9, leaving behind the Worker Drones there and allowing them to live their own lives in the wreckage. Unfortunately for them, their attempt at a peaceful existence is quickly disrupted when their creators at the intergalactic Mega-Corp JC Jenson, not willing to let their AI run free, sends violent killing machines, the Murder Drones, to wipe them out.

The pilot premiered on the GLITCH Channel on October 29, 2021, with seven more episodes planned in the future.

"You led a murder drone here?"

One good look at a murder drone is enough to make Uzi's father panic.

"You led a murder drone here?"

One good look at a murder drone is enough to make Uzi's father panic.