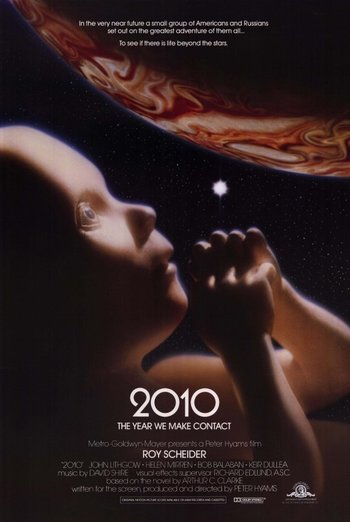 "Something's going to happen... Something wonderful..."
"My God, it's full of stars!"
Advertisement:

2010: The Year We Make Contact, directed by Peter Hyams and released in 1984, is the film adaption of 2010: Odyssey Two by Arthur C. Clarke (published 1982). It is the sequel to 2001: A Space Odyssey. Following the continuity established by that movie rather than the original novel (for the most part, anyway), it is about the second manned mission to Jupiter, following up on the mysterious disappearance of David Bowman aboard the ill-fated Discovery mission nine years earlier.

Dr. Heywood Floyd (Roy Scheider), the former director of the National Council on Astronautics, who took the blame for the failure of the Discovery, is tapped to go on the mission along with two other U.S. scientists — engineer Dr. Walter Curnow (John Lithgow), who is tasked with boarding Discovery and restoring its systems; and computer scientist Dr. R. Chandra (Bob Balaban), who designed the H.A.L. 9000 and is seeking to answer the question of why it malfunctioned and tried to kill its crew.

Their mission is complicated by the fact that they are traveling aboard a Soviet spaceship, the Alexei Leonov, whose crew is not at all friendly to their presence and may be operating under a completely different set of orders. In addition to exploring Jupiter and salvaging Discovery, they must also try to solve the mystery of the Monolith, an enormous alien artifact orbiting the planet that is apparently connected with Bowman's disappearance. And of course, the creators of the Monolith have an agenda all their own, one that might alter the future of humanity forever.

The film 2010 was viewed by some as a Genre Shift due to the change of directors and tone. It's much more of an action film, concentrating on the conflicts between the Russian and American crews and the dangers they face in their exploration of Jupiter. It follows the plot of the novel 2010 fairly closely, except for some significant excisions, but the Cold War-becoming-hot aspect is completely invented for the film and the time scale dramatically compressed.

The novel has two more sequels in the Space Odyssey series: 2061: Odyssey Three and 3001: The Final Odyssey.

This novel and film provide examples of:

"We are only tenants on this world. We have been given a new lease — and a warning — from the landlord."