Our Graphics Will Suck in the Future 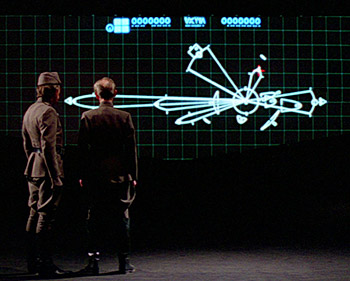 Well, it was a long time ago.
Advertisement:

This trope is basically Zeerust applied to the digital era.

The page image represents what a computer display in Star Wars looks like. Now look anywhere at your screen, and compare to what your computer can do.

In a Science Fiction program, the graphics quality of whatever computer is used is that of what computers were available at the time. Therefore, there are no screens in 1960s shows and there are no GUIs in the 1970s and 1980s.

In earlier eras, the writers probably didn't think computer graphics could improve. As the nature of computer advancements became more apparent, however, such limitations have become more about budget and imagination.

Arguably can be justified in a scenario when functionality is preferable to looks. After all, the last thing you want to see on the screen of your spaceship's on-board computer in the middle of a crucial operation is a graphics driver error. This is Truth in Television in a surprising number of cases, where complex graphics are not only unnecessary, but are actually a hindrance, or even dangerous. Although in the future, our graphic cards will probably be way better and more reliable too.

Often Invoked to avoid being a Cosmetically Advanced Prequel. Cassette Futurism is when this is done deliberately to create a Retro Universe feel.

NASA engineers chose computer systems for the spacecraft that were not the absolute most advanced even in their own day (1977), in favor of systems that were intended to never have the slightest chance of failing while in-mission. 40 years later, the still-functioning first spacecraft to ever leave the solar system

bear testament to their constructors' foresight of valuing proven endurance over cutting-edge yet uncertain technology.

Alternative Title(s): We Will Use Micros In The Future