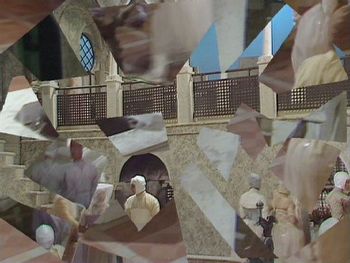 All right, who broke the camera?!?
"If we had an index file, we could look it up in the index file... under 'index file'."
—Tegan discovers recursion
Advertisement:

The one where Matthew Waterhouse throws up, Nyssa forgets what hydrogen is, and the crickety-cricket celery wearer makes his debut.

Previously on the big Dee-Dub, the Doctor took a nasty spill from disconnecting the Pharos Project's power cable, prompting a sudden regeneration. (It's a big one too — even his shoes regenerated!) Unfortunately, he doesn't take to it very well, and is in danger of turning senile; that is, unless he can get some rest and healing in the TARDIS' Zero Room, a sensory deprivation suite.

The freshly-regenerated Fifth Doctor wanders around his TARDIS with some regeneration amnesia, briefly and randomly adopting mannerisms from his past selves, constantly mistaking Adric for past companions, peeking into rooms and unravelling his scarf. The TARDIS is kind enough to hand her new Doctor a crickety outfit and a cricket room. Tegan just met the Doctor hours ago, and (though she took the whole new-body thing surprisingly calmly) even she realizes that he's gone batty. They get him into the Zero Room note which would be a great name for a nightclub, but he's only just stretched out (three feet above the ground) and closed his weary eyes when the TARDIS' Cloister Bell alarm starts up. This is annoying enough for us humans when we're tired from a hard day slinging data and just need a good night's sleep before an important meeting in the morning; imagine how much it must suck if you're tired from saving the world and dying and being born again, plus the alarm isn't for an 8 AM meeting but an urgent warning that your spacetimeship is headed into the Big Bang.

Tegan and Nyssa put their heads together (as usual, Adric is being difficult and unwillingly in league with the villain), consult the TARDIS manual and inexpertly shteer it to "Castrovalva: the Dwellings of Simplicity". Its brochure makes it sound like an alien day spa: the perfect place for a bit of R&R. The Doctor wakes up for a bit, and the TARDIS tries to help out by dumping a lot of random medicine on his head and providing him with a wheelchair. While spinning in circles in said chair and being extremely amnesiac, he instructs his companions on how to propel the TARDIS away from disaster by deleting rooms. Luckily, the control room doesn't accidentally get deleted. Sadly, the Zero Room does, so they have to improvise a new portable one out of the doors, which were the only part to escape jettisoning note (by using the Sonic Screwdriver as *gasp* a screwdriver; the amazing moment is available to buy at the BBC Store!).

Once they've landed and spent most of an entire episode carrying the Doctor through the woods, they discover that Castrovalva is... weird. It's built funny. All the books in the library are written in the same handwriting, even the very old ones. The quaint passageways always seem to lead to the same town square. Even more ominously, the kindly and wise elder statesman of the city is played by someone named "Neil Toynay", which of course is an anagram for "Tony Ainley", which means that the whole thing was an elaborate trap set by the Master! And they must escape Castrovalva as it dissolves into a puddle of M. C. Escher illogic around them.

Eventually, the Doctor regains his memory, convinces the townsfolk to override their collective Weirdness Censor and defeats the Master. Also, it turns out that Tegan didn't steer the TARDIS at all - that was all the Master's doing. The Doctor pins a vegetable to his coat and happily heads over to the next adventure.