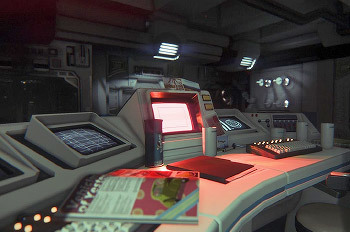 In the future, we can remember it for you... on Memorex!
"The game's setting is sort of like Steam Punk except with retro computers instead of steam which I guess needs a name. DOSpunk? CRTpunk? Pentiumpunk? So-nerdy-my-underpants-are-spontaneously-wedgieing-themselves-punk?"
— Zero Punctuation review of Quadrilateral Cowboy
Advertisement:

A technological aesthetic reminiscent of mid-1970s to late 1990s tech (regardless of the real time setting of the media) as codified by early microcomputers like the Altair 8800 and the IBM Personal Computer, cold war era technology, the iconic imagery of the mid to late space race, or the post-Cold War "end of history" period in the 1990s, which was characterized by fascination with virtual reality technologies (such as helmets) and 2D computer animation.

Whether it be the bold colors and geometric shapes, the tendency towards stark plainness, or the exotic-looking computers and proto-cell phones, it is clear that this is neither the Raygun Gothic of days past nor the Everything Is an iPod in the Future aesthetic that would follow, but a bridging point that contains elements of both styles.

As the name implies, a good way to judge if this trope is present is the frequent use of cassettes, which were used in the decades named above to house magnetic tape ubiquitous in technology of the period, and later on often contained ROM chips for game consoles and occasionally add-ons for computing hardware. Other technologies to look out for are CRT displays, computer systems reminiscent of microcomputers like the Commodore 64, freestanding hi-fi systems, small LCD displays as opposed to full color screens, floppy disks, VHS, and loads of analog technologies. The Internet or some analogue may exist, but if it's used more frequently than physical media to exchange large files, chances are that the work isn't using this trope. Optical CD disks may also be present, but no DVDs.

Expect many high-end electronics to come in beige box cases. When actually using the electronics or looking into the displays, expect that Our Graphics Will Suck in the Future, there will be 2D Visuals, 3D Effects and some employment of Retraux by virtue of having said 3D consist of very simple geometry with stock textures. Odd hybrid setups echoing the experimental era of user interfaces are also common: one might find rotary dials and switchboards alongside a more modern keyboard, a joystick used in place of a mouse on an low-resolution icon-based GUI, or basic LCD readouts and indicator light displays with cryptic labels seemingly included as afterthoughts acknowledging that the user might like to know what, if anything, a device might be doing.

This aesthetic can be considered a retro version of Cyberpunk, and is largely inspired by cyberpunk writers from the 1980s and 1990s, such as William Gibson, Neal Stephenson, and Roger Zelazny. It also draws inspiration from Cypherpunk, a movement promoting online anonymity and the use of advanced cryptography that originated in the late 1980s.

Compare and contrast Everything Is an iPod in the Future. Compare to Computer Equals Tape Drive, Retraux, Retro Universe, Zeerust Canon and Raygun Gothic.