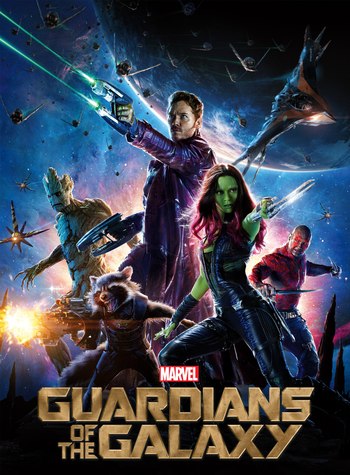 Far off, in the depths of the Andromeda Galaxy, the expansionist Kree Empire has reluctantly made peace with the Nova Empire. But one of the most vicious and powerful Kree warlords, Ronan the Accuser (Lee Pace), still has vengeance on his mind. He goes behind his government's back and strikes a pact with one of the most dreaded beings in the galaxy, Thanos the Mad Titan (Josh Brolin). In exchange for a certain ancient relic, the Mad Titan will grant Ronan's one wish: genocide on Xandar, the capital of the Nova Empire.

However, the relic has already been looted from its hiding place by Peter Quill (Chris Pratt), a.k.a. "Star-Lord", an outlaw and thief abducted from Earth as a child. This Earthling knows nothing of the relic's nature — he's been raised by a band of Ravagers led by Yondu Udonta (Michael Rooker) and simply wants to sell the artifact off. He goes behind the Ravagers' back and takes the relic to Xandar, where he's set upon by the bounty hunters Rocket Raccoon (Bradley Cooper) and Groot (Vin Diesel) and Thanos's pet assassin Gamora (Zoe Saldaña), who is sister to Ronan's soldier Nebula (Karen Gillan). After this Ragtag Band of Misfits ends up flung into a maximum security prison with Drax the Destroyer (Dave Bautista), their mutual self-interest pits them against the Nova Corps, the Ravagers, and Ronan's relentless pursuit... and unexpectedly turns them into saviors.