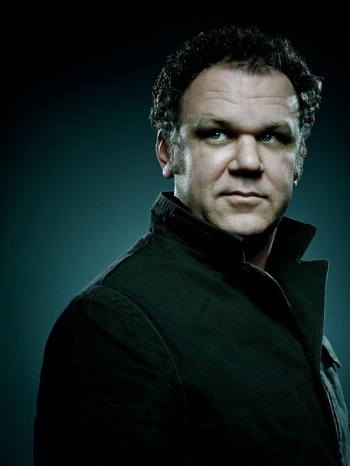 "I've never been someone who's been given work because of the way I look or because I have some box office appeal. I get work because people know I'm swinging as hard as I can, trying to connect, giving it my level best."
Advertisement:

Making his film debut in Casualties of War, Reilly is one of several actors whose careers were launched by Brian De Palma. To date, he has appeared in more than fifty films, including three separate films in 2002 that were all nominated for the Academy Award for Best Picture. He has been nominated for an Academy Award for Best Supporting Actor for his role in Chicago and a Grammy Award for the song "Walk Hard", which he performed in Walk Hard. Since 2007 on Adult Swim he has starred in Tim & Eric Awesome Show, Great Job! and its spinoff Check It Out! with Dr. Steve Brule as news correspondent Dr. Steve Brule. He is also the voice of Wreck-It Ralph.