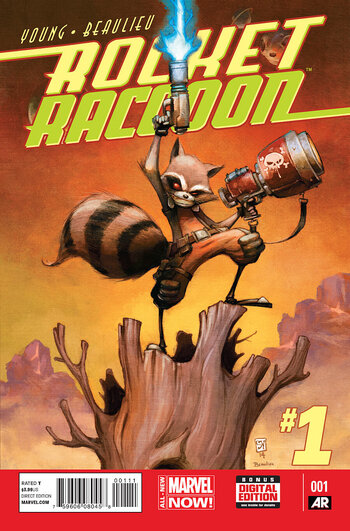 The cover to volume 2 #1 by Skottie Young.
The Marvel Comics character of Rocket Raccoon has had several self-titled series and prominent stories so far:
Advertisement:

Rocket Raccoon Vol 1 (1985) was a four-issue mini-series written by Bill Mantlo, with art by Mike Mignola. For more information, please see its own page.

The four-issue limited series Annihilators (2012) included a backup feature by Dan Abnett that followed Rocket and Groot after the dissolution of the Guardians of the Galaxy. This story is notable for revealing what really happened on Halfworld and the fates of its denizens.

Rocket Raccoon Vol 2 (2014–2015) was a series written and drawn by Skottie Young. Rocket goes on the run from the Ex-Terminators, a verital army of, well, his exes, while at the same time framed for murder by his nemesis: Blackjack O'Hare! The series ended with eleven issues.

Rocket Raccoon Vol 3 (2017) was a five-issue mini-series written by Matthew Rosenberg, with art by Jorge Coelho. As part of the "Grounded" storyline, Rocket has found himself trapped on Earth. Sick of being on a backwards mudball, Rocket vows to find a way off this flarkin' planet.

Rocket Vol 1 (2017) was a six-issue mini-series written by Al Ewing, with art by Adam Gorham. For more information, please see its own page.

For tropes about Rocket Raccoon himself and his associates, see the characters page.