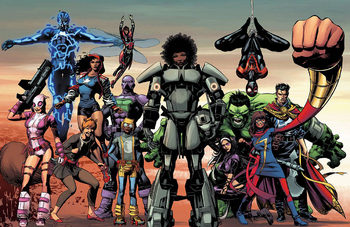 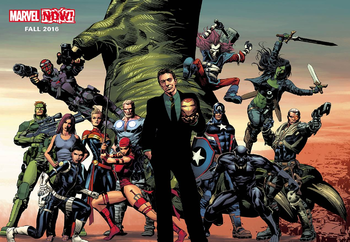 Marvel NOW! is the 2016 relaunch of Marvel Comics, set in the wake of their massive Civil War II crossover event earlier that summer (Well, at first). It's also a spiritual successor to the original Marvel NOW! relaunch of the same name, as well as one to 2015's All-New, All-Different Marvel.

As was the case with its predecessors, Marvel NOW! is not a continuity reboot; instead, new books will be published, while existing titles/characters may be refreshed with new creative teams and status quos. According to Marvel editorial, the conclusion of Civil War II will lead to shocking new developments within the Marvel Universe, and nothing will be the same anymore.

While the full extent of Marvel NOW! initially wasn't known, its tagline and logo teased a few wrinkles thrown onto existing Marvel concepts. Regardless, a free previews magazine dedicated to the initiative was offered to customers in mid-July, with more details spilling out over the duration of Civil War II.

After Secret Empire ended, yet another relaunch of the line happened in September 2017: Marvel Legacy.

General Developments
Some titles and characters confirmed to be getting some emphasis during Marvel NOW! include:
Marvel NOW!

The following titles will launch during this phase, listed with their original creative teams. Bolded titles are ongoing.

Deadpool & The Mercs for Money

Running With The Devil