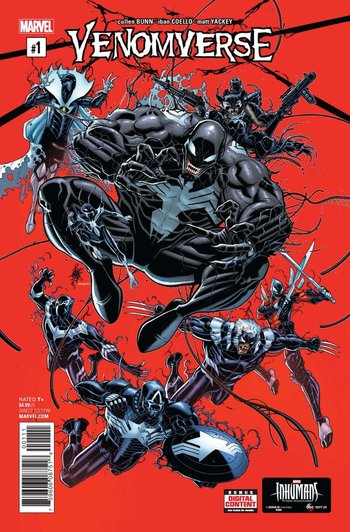 Venomverse is a 2017 Bat Family Crossover for Venom, written by Cullen Bunn; and is the first of a three-part series. It parallels 2014/2015's Spider-Verse in that Earth-616's Eddie Brock must team up with alternate universe incarnations of Venom to save the multiverse, but is more rooted in science fiction and horror. Rather than the Inheritors, the symbiote squad is up against the Poisons, a group of creatures seeking to attain unlimited power and conquer the Multiverse by assimilating and dominating symbiotes. A crossover sequel with X-Men: Blue titled "Poison X" began in January 2018, while a second, Marvel-Universe wide sequel called Venomized was released in April 2018.

In January 2023, it was announced that the finale of the Venomverse saga — Death Of The Venomverse — would kickstart the "Summer of Symbiotes" and have Carnage as the Big Bad.