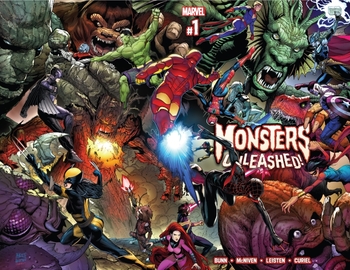 Who let the Monsters out?
In the middle of the night, shooting stars begin raining down all around the world. Soon afterward, enormous Eldritch Abominations known as Leviathons are rampaging through major cities all around the world. New York City, Wakanda, London... all besieged by enormous monsters that require the world's mightiest heroes to defeat.
Advertisement:

In other words, another eventful day in the Marvel Universe.

While the heroes battle for their lives, a young boy named Kei Kawade continues to draw any number of monsters in his favorite notebook as shooting stars continue to streak through the skies overhead...

Monsters Unleashed is a comic book storyline written by Cullen Bunn and drawn by Steve McNiven. A Crisis Crossover Mini-Series that ran from January 2017 to the March of that year, it, brings together many of the biggest heroes in the Marvel Universe to battle a seemingly inexhaustible supply of dangerously powerful alien monsters and is the culmination of months of foreshadowing through the increase in monster attacks in comics. More importantly, it acts as the Origin Story of Kei Kawade, who is set to become the center point of the conflict and soon confronts his new powers and destiny with the callsign "Kid Kaiju".

It was later given a sequel, Monsters Unleashed II, a monthly series that follows Kei's adventures after the conflict, with him being taken under the express protection of Damage Control and S.H.I.E.L.D. and relocated to an artificial island where he tries to learn how to make the most of his abilities before being called upon to stop truly titanic threats.