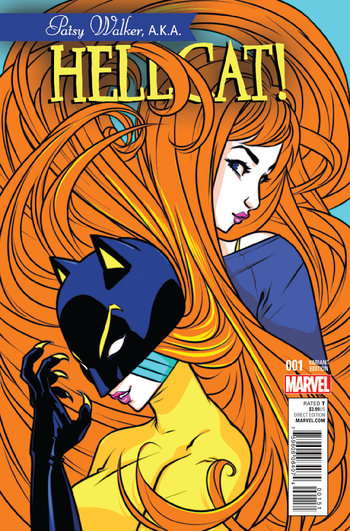 Patsy Walker, A.K.A. Hellcat! is a series by Marvel Comics, written by Kate Leth with art by Brittney L. Williams.

Patsy Walker has managed to escape her past, her enemies, and Hell itself (literally), but nothing compares to job hunting in New York City!

In her first ongoing series, Patsy has to make rent and dodge bullets, and she barely has time to deal with her mother’s exploitative romance comics about her childhood resurfacing, much less how they start to interfere with her work and dating life. As she goes from living a double life to a triple, what the Hell is Patsy Walker supposed to do?

It launched in December 2015 as a part of All-New, All-Different Marvel following the Secret Wars event, and finished in April 2017, with 17 issues.