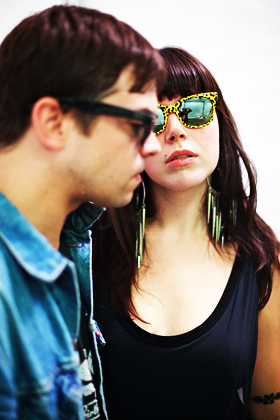 I know it's hard, but you gotta deal with it.
Advertisement:

Sleigh Bells is an Dance-Punk/Alternative Rock duo made up of vocalist Alexis Krauss and guitarist Derek Miller. The two met in a Portuguese restaurant that Derek worked in, when Alexis' mother found out that he was looking for a bandmate, and suggested her daughter for the spot. A short while after, the two released their debut album Treats, to great critical acclaim.