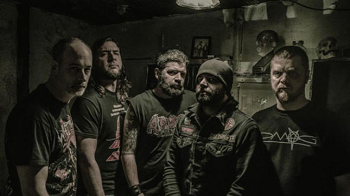 Skinless are an American Brutal Death Metal band, known for their cynical take of comedy, generally with Death Metal as a whole being the center of said grim comedy.

They disbanded in 2011, with Noah Carpenter saying that though he wanted to continue with the band, that there was "No fire left" to do so, and played their last show at the Maryland Deathfeast 2011. Then they went to do their own thing with other bands, such as Jason Keyser joining the highly acclaimed Origin

They reunited in 2013 with the lineup seen on Progression Towards Evil, with Dave Matthews (not that one, obviously) from Carpenter's former project Armor Column being drafted shortly after to make it a five-piece. Only the Ruthless Remain, their first post-reunion album, will drop on June 2, 2015. Touring will not occur, however; by their own admission, multiple members cannot tour, and shows in support of the album will be limited to festival appearances and one-offs.

This band exhibits examples of the following tropes: