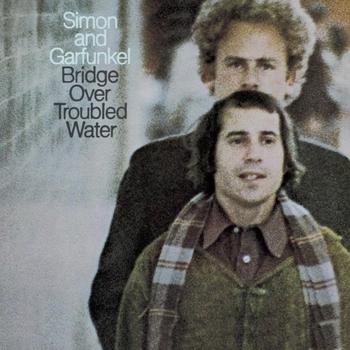 When you're down and out, when you're on the street
When evening falls so hard, I will comfort you
Then I'm laying out my winter clothes
And wishing I was gone, going home
Where the New York City winters aren't bleeding me
Leading me, going home

In the clearing stands a boxer and a fighter by his trade
And he carries the reminders of every glove that laid him down
Or cut him 'til he cried out in his anger and his shame
"I am leaving, I am leaving," but the fighter still remains
"The Boxer"
Advertisement:

Bridge Over Troubled Water is the fifth and final studio album by Simon & Garfunkel, released in 1970. It is one of the best-selling albums of all time. It scored hit songs with the title track, "El Condor Pasa (If I Could)", "The Boxer" and "Cecilia" and was awarded the 1971 Grammy Award for Album Of The Year. A weird, but true fact is that former US President Lyndon Johnson listened a lot to this album in the final years of his life, because it cheered him up when he felt down. Despite the global success tensions were already noticeable between the duo and after the release they decided to split up.

Song for the Troping: