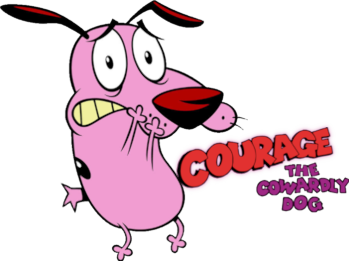 That's like a smart person being called "Stupid".note At least he does try to have moments of bravery.
"For example, your leader is named Thinker, yet he appears to be something of a dullard."
— Yui, Sword Art Online Abridged
Advertisement:

Sometimes, a character is given a name that is ironic considering their personality, lifestyle, or whatnot. Often, this is Played for Laughs, but more serious examples do exist.

See Ironic Nickname for cases when the character's nickname, instead of their given name, is ironic. Subtrope of Non-Indicative Name.

Related to Fluffy the Terrible (where a scary monster or animal is given a decidedly non-scary name), Deathbringer the Adorable (where a cute, relatively harmless animal is given an imposing name) and Tom the Dark Lord (which applies Special Person, Normal Name to an evil character). A Dog Named "Cat" may also count as an ironic name, especially if the animal is named after its natural enemy, predator or prey. When this trope is applied to an object or organization rather than a person, see Super-Fun Happy Thing of Doom. Contrast, of course, Meaningful Name.

Real Life examples of this are also called "inaptronyms,"

the opposite of aptronyms, which mean Meaningful Names.

The perfect name for this team!

The perfect name for this team!