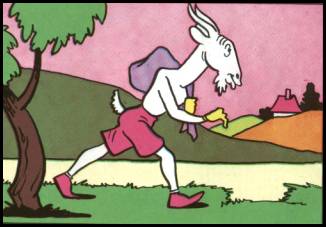 Illustration from the original first book * ca. 1933
Koziołek Matołek, a name which can be translated as "Silly Billy-goat", is a character from a series of Polish children's books, created in 1933 Kornel Makuszyński (story) and Marian Walentynowicz (art). The books are made up of small illustrations with a rhyming four-verse caption under each one, and are often referred to as "the first Polish comic books", though they're better described as Picture Books.

The main character is an anthropomorphic goat that is on his way to the town of Pacanów, where he would get his hooves shoed. A bumbling, naive character like Winnie-the-Pooh; his adventures were surreal like a Dali painting and would take him around the world.