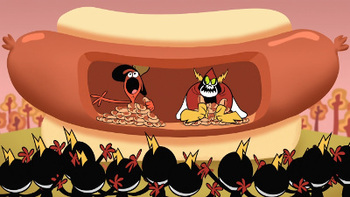 At an eating contest you boast
That you can eat the most
How do you down your fiftieth piece of pie?
Eagerly (ugh!), eagerly (yech!), Eager L.Y.
— Tom Lehrer, L-Y

Exactly What It Says on the Tin, two or more characters, at least one of them possibly being a Big Eater, engage in this type of contest, where they try to out-eat each other with as much food as possible. Often, the Big Eater will come out as the victor, while the other loses by becoming full too fast, sometimes ending up with a Balloon Belly.

There are also some cases where both characters will lose in the midst of the contest, by also gaining the aforementioned Balloon Belly. Also, after the Big Eater wins, sometimes he'll ask, "What's for dessert?" or show signs that he's still hungry.

Some video games will feature these as a Mini-Game; expect rapid Button Mashing to be the main (if not only) strategy, as well as rotten or even explosive food to be mixed in as an extra challenge.