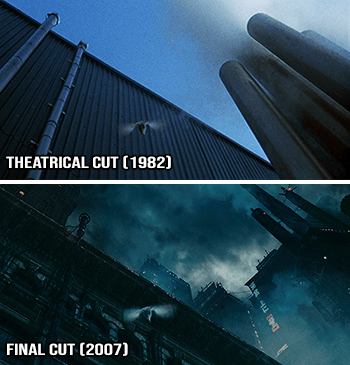 Announcer: Yes, all the charm of a simple little cartoon will melt before your eyes as it is replaced by newer and more standardized animation!
Parker: In the scene at the bus stop, we always meant to have Imperial walkers and giant dewback lizards in the background, but simply couldn't afford it.
— South Park, "Free Hat"
Advertisement:

Sometimes film directors are not fully satisfied with their movies, and want to go back and re-edit them, taking out scenes that they don't like, adding those that were originally cut, rearranging dialogue or otherwise playing around with all the material that was made in the original creation of the film. Studios have long produced "extended" or "unrated" versions of movies that the directors were already satisfied with, as a promotional gimmick to attract potential DVD buyers. This is generally considered a Re-Cut or Director's Cut.

This trope goes one step past that, where a work is extensively changed by its creators (and sometimes not even them) to update the work with modern technology or new footage that was not available or recorded at the time the work was originally created. Film Purists (among both critics and directors) sometimes take issue with it, believing that altering the original film is diluting the charm of the original, diminishing the contributions of the original creative team (such as splicing in The Other Darrin or a Fake Shemp over the original actor), or, worse, altering the context of scenes in how they played out originally and the plot itself. These changes include:

Named for George Lucas, who's done this to all of his films, most notably the first three Star Wars films (A New Hope,note which didn't even receive a subtitle until its altered version The Empire Strikes Back and Return of the Jedi). Some fans have widely criticized the reissues of the original Star Wars series, which they argue contrasts heavily with films otherwise clearly made between 1976-1983 but having bits and pieces of modern VFX tacked on. See the film examples for more on this and Lucas.

Many times in the case of sequels and otherwise expanded franchises, these new versions are meant to help the franchise align better both visually and potentially fix Continuity Snarls. It's easier to sell box sets if they all have the same font.

You can expect a considerable backlash when this trope appears, but as always consider that Tropes Are Not Bad. Art is malleable, and having new work to appreciate can make us review both the old and new in a new light. These new versions are often intended to introduce the work to a new audience and often succeeds. In some cases the new version dominates the new releases, but in turn this can make the original almost Shrouded in Myth. Indeed, there are cottage industries on the internet of comparing different versions side by side, often using Keep Circulating the Tapes methods to acquire the different versions. Conversely, similar complaints are leveled towards a Re-Cut in general, believing a theatrical release should be the end of editing.

It's worth noting that the majority of creators do not have final cut privilege or a copyright on their work, being really owned by the corporations. Sometimes the new version is made by those who had nothing to do with the original, and the level of clout needed to do this to your own work is rare. On the other hand, sometimes the new version is made by the creators themselves, who finally got the chance to edit the work the way they wanted to in the first place.

This process is sometimes referred to as a Remaster but that is actually about cleaning the image and/or audio to update it for modern entertainment formats, which often involves a brand new film transfer to help preserve it or restoration of old audio tracks. Colorization is similar, as making the colorization usually involves a remastering of the original to maximize quality.note People like Ted Turner restored the films in his library prior to colorizing them, and simultaneously released the restored black and white films alongside the colorized versions. This helped preserve black and white films for future generations.

See also Orwellian Retcon, where the work is altered to fit with later works in the same story. The musical version of this trope is The Not-Remix, while Gaming examples would fall under Updated Re-release and more serialized worksnote e.g. Comics, Webcomics, TV Shows, Fanfics get New First Comics.

Strictly speaking, this trope applies the most when the alterations are done purely for artistic reasons as opposed to purely censorship or digital recreation in instances where the original print has badly deteriorated. Contrast Bowdlerise or Macekre where someone other than the creator alters the work, usually for localization.